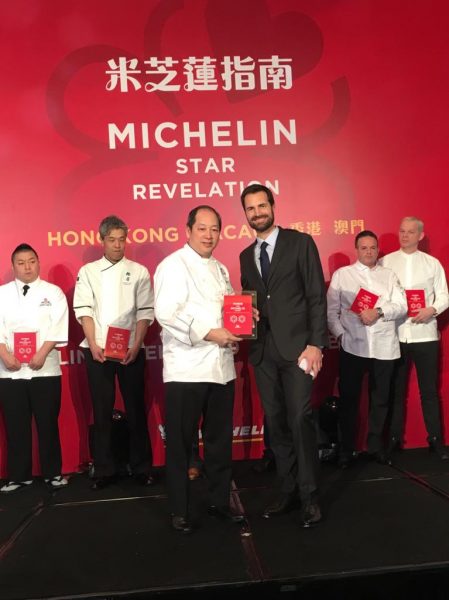 The name, Ying Jee Club represents prosperity, success and business in Chinese. Debuting last August, 2017, Ying Jee Club exudes and takes pride in the highest standard of excellence in Cantonese cuisine by sourcing only the best and freshest selection of luscious, seasonal ingredients. Under the credible leadership and expertise of highly acclaimed Chinese Executive Chef Siu Hin-chi, the extensive menu exemplifies traditional Cantonese favourites characterised by refinement, creativity, intricacy and elegance. In response to being awarded a star just three months after three months of operation, continuing his success and awarded two Michelin stars within 16 month, Chef Siu expresses his most sincere gratitude and appreciation to the Michelin Guide and all of its readers. He adds: “We are absolutely thrilled that Ying Jee Club has been recognised with a coveted star for its second consecutive year from the Michelin Guide, It is a great honour for our

team to receive recognition for our dedication to providing an exceptional dining experience. We will continue to offer our dedicated thoughts on fine indulgence and culinary excellence.”

Head Chef, Siu Hin-chi is no stranger to the arts of Cantonese Cuisine, especially with the impressive amount of 18 Michelin Stars, including the two new stars he has accumulated over his 35- year career. His culinary treasures not only present Ying Jee Club’s guests with the most delectable of Cantonese Cuisine, but also utilises cooking techniques dating back from the Tang Dynasty with the best ingredients from around the world and served in the heart of Central. To begin with, the Crispy Salted Chicken starting with the freshest, seasonal local chicken, the chicken is meticulously cooked and soaked in a rich broth of Jinhua ham and fragrant dried shrimps, air dried for 12 hours, and then made to order by being fried till it is perfectly crispy and gloriously golden. Sautéed Lobster with Egg White, Yunnan Ham, Spring Onions and Crispy Vermicelli  is Chef Siu’s  take on a classic dish, cooked with lobster instead of crab that the original recipe calls for, a seemingly simple dish is  filled with umami flavours coming from the succulent, sweet lobster, the silky egg white seamlessly and perfectly combined in to the dish. Last but not least, the Crispy Suckling Pig with Goose Liver Pate, Accompanied with Sauteed Pigeon and Sea Cucumber. Crispy Suckling Pig is known for its perfectly crispy exterior paired with its juicy, tender and flavourful meat. The unique addition of goose liver pate offers a subtle sweetness in contrast to the savoury suckling pig. This is served with sautéed pigeon cooked with sea cucumber, one of the most prestigious dried seafood in Cantonese Cuisine.

The wine cellar at Ying Jee Club features an eclectic wine list for over 300 bottles of wine and liquor from around the world, sought after by the top of Hong Kong dining scene.

Overlooking the central business district on Connaught Road, the stylish, two-storey Ying Jee Club, was sculpted by famed architect, founder of SLD, Steve Leung and his design director Janet Choy. The graceful setting is accentuated by an emerald green backdrop, exuding a calming ambience. This jewel tone is paired together with recurrent golden highlights, further creating a stunning contrast with the subtle wooden panel floor and orchestrating a wonderful ambience.

The grand dining hall, the bar, the lounge, and the four enclosed private dining rooms can serve up to 105 guests. The elegant restaurant resembles Hong Kong’s diversity and capability catering to a range of different occasions and individuals. Ying Jee Club is open for lunch and dim sum daily from 11:30am to 3:00pm, dinner from 6:00pm to 11:00pm. To make a reservation, please call +852 2801 6882.

ZS stands for “Zao Shen”, a legendary figure in Chinese folklore and F&B culture. “Zao Shen” is Kitchen God in Chinese. According to legend, “Zao Shen” is also one of the household gods, responsible for monitoring the virtue and behaviour of each family, brining warmth, health, prosperity and happiness to mankind.

“Zao” means “stove”. Named after the Kitchen God, we strive to do our best in pursuing fine food and impeccable service. Believing that good food is truly a blessing, we hope to bring a superb dining experience to each of our customers.